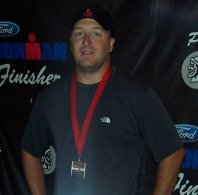 I finished the Ironman in Lake Placid on Sunday 7/23 in 16 hours and 25 minutes. The day began with breakfast at 3:30am and when I arrived at bodymarking at 5am a light mist was coming out of the air. By the swim start it had stopped misting and switched to rain, but by the time I exited the water, 1 hour 28 minutes later, the rain had stopped. The swim was an absolute treat. The water was clear, not chlorinated, and fun to swim in - the taste and smell reminded me of my days as a child at Baptist Pond.

The first loop of the bike course was wet and cold as the temperature at the start of the day was somewhere in the low 60s. As I finished the last climb of the first loop I was just ahead of the men's leader (he of course was finishing the bike leg) and needless to say the roar of the crowd was deafening - I felt like Lance Armstrong on Alpe d'Huez as people parted the road to make way for the riders. I headed into town, grabbed some fresh water bottles and made my way out for the second loop of the bike. I did my best to stick to a conservative game plan during the first loop and it paid off, I felt super fresh at the start of the second loop, but ran into a patch of trouble around mile marker 76 - my left knee started to shoot pain during the downstroke and was making climbing very difficult. After some on-the-bike self massage, trigger point, and a little praying - the knee pain went away around mile 91. I don't remember much about miles 92-101, but let me tell you the last 11 miles seemed like 111 miles an although I had already ridden the loop earlier in the day, I couldn't remember what the turn before the last climb looked like. So each corner brought a sense of relief, only to be met by another corner further up the road. Finally, at the last climb, I put all my cards on the table and went for broke, I climbed out of the saddle and tried to dance up the hill (After being on the bike for almost 8 hours - dancing is a really generous term here - in my mind I was Lance Armstrong on Alpe d'Huez, but probably looked more like Neil Armstrong on a bike at 106 years old). The conservative approach on the first loop worked well and I only lost 7 minutes during the second loop. I finished the bike in 8hours and 7minutes.

I made it into transition, put on my running shoes and headed out of town. The crowd was incredible, cheering loudly and it wasn't until the first mile marker that I realized I have to run a marathon now. My legs felt good, relative to the day and I decided to conserve some energy - running 8 minutes and walking for 2 minutes until I started to get scared I might not make the finish, I then began to run 10 minutes and walk 2 minutes, but could never seem to time it right with the aid stations so I would walk through each one, alternating water and gatorade at each station and running afterward. I made it to the first turnaround and started to head back into town. Let me tell you the run back into town was at times difficult because as you pass the halfway point, you start to see all the other people heading into the oval and toward their finish. Meanwhile, I was headed back out to finish my second loop of the run. I was about a mile out of town when I hit my first real low point. Eventhough I was more than halfway through the marathon - I knew I still had about 3 hours left of running. The sun had now begun to set behind the mountains and the course was getting dark. On this particular section of the run course, the road winds through the woods along a river and the course is puncuated by a few rolling hills. Ironically, it was at this point that my body started to say "run" (please note the lower case punctuation as it was more of an casual suggestion rather than a forceful command) I don't know whether it was the draw of finishing or just the desire to get the day over with as quick as possible, but I was able to put together a solid 50 minutes of running broken up every 15 minutes by an aid station. I made it to the turnaround from which point it is about 7+ miles back into town. It was here I hit my lowest point. My legs did not want to run anymore and I was forced to walk much of the way back into town. At this point I met up with Kevin, he was also doing his first Ironman and was physically feeling the same way I was. We walked and talked our way back into town and at the base of the last hill met up with Christine, Kathryn, and also my brother. The five of us made our way up the hill and as we turned onto Mirror Lake Drive, Kevin dug deep and decided he was going to finish the race running. Motivated by his effort and the encouragement from Christine, Kathryn, and my brother I started to run. I think I made it about 10 feet and my body said "Whoa there cowboy - not yet." Together we walked to the last turnaround and I decided I was going to save my energy until the last moment. Christine and company walked patiently beside me as I rambled toward the finish. Then I could see it, the outside of the oval, the tents at transition, and the draw of the crowd gave me the strength to run. I entered the oval and it dawned on me - I did it! I am going to finish an Ironman! At the last turn of the oval my kids were waiting for me and together we crossed the finish line hand in hand - with my father along for support (Kevin - the guy who I had met earlier tried to finish carrying his daughter but fell at the finish. I guess Jen had suggested my father come along just in case I tried to do something stupid).

Anyway, I am back in NJ and feeling incredibly emotional about the event even as I write this report. It was an incredible experience and had you asked me yesterday if I would do it again - I would have said "NO", but if you were to ask me today, I would say "maybe". Who knows what tomorrow will bring. Like the saying goes - Pain is temporary, Pride is forever.

Thank you to all of my family for their love and support through this entire process. Thank you to my friends whose motivation and encouragement kept me going.

Watch me finish I come across the line 1:11 into the clip.